Why Does The Church Need To Meet Together?

This is an article from Focus on the Family explaining why it is important for believers to meet together in a corporate gathering. 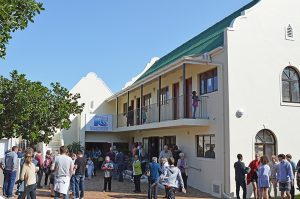 WHAT IS THE CHURCH?
BY ROBERT VELARDE

“When most people hear the word church they probably think of a building. Maybe it is a fancy building or a simple building where believers gather. But biblically speaking, a church is much more than a building. In fact, some would say that the church is not a building at all, but is all about the people. But what is the church? The area of theology that seeks to understand all aspects of the church is known as ecclesiology. It is derived from the Greek word ekklesia which is a general term referring to a gathering or assembly. There are a number of aspects to the subject of ecclesiology, but this article will focus on defining the term church, understanding its nature and purpose, looking at some biblical images of the church, and emphasizing church unity on essential truths.

What is the Christian Church?
The early Christian church had no buildings, at least not in the sense of what we would consider church buildings today. First-century Christians were often persecuted and, as a result, often met in secret usually in homes. As the influence of Christianity spread, eventually, buildings dedicated to worship were established and became what we know today as churches. In this sense, then, the church consists of people, not buildings. Fellowship, worship, and ministry are all conducted by people, not buildings. Church structures facilitate the role of God’s people, but they do not fulfill it.

What Does the Church Do?
The church is not a building, but a body of believers with a specific nature and purpose. These biblical roles or ministries of the church are foundational to it. What are these roles? They are many, but key to any church are foundations in worship, edification, and evangelism. Worship is God-centered and Christ-centered. It is not about entertaining Christians with flashy displays or presentations, but about expressing our love by worshiping our Creator. We are to praise and glorify God in worship. As such, every Christian needs to be part of regular fellowship and worship. Edification is also a role of the church. It involves edifying believers, but also nurturing, building up, or helping believers to mature in Christ. To this end, churches are tasked with a variety of ministries such as Bible study, continuing education in related areas, praying for one another, acts of genuine hospitality, and more. Evangelism is also a key role of the church. This means reaching out to a lost world with the Good News about Jesus. Since people often have questions or doubts about Christ and Christianity, knowing the truth and being able to defend it (apologetics) is also part of the role of the church. But beyond evangelism in the sense of reaching out with the gospel, the church must also express compassion and mercy tangibly by helping others. In following Christ’s example to love others, the church, too, must seek to make a real difference in the world while not neglecting to share the message of Christ. If a church fails to fulfill any of these key roles – worship, edification, evangelism – then the church is not functioning as God intends. Granted, there are times when churches face challenges and struggles to one degree or another, but a healthy church seeks to overcome such challenges in a way that honors God and His intentions for His church.

A Church Divided or United?
The concept of the visible and local church also touched briefly on the challenges and tensions that sometimes result in churches. Critics point to divisions and disagreements among Christians as evidence of a lack of unity and, hence, a lack of real biblical support undergirding the Christian church as a whole. Is this true? In some cases, Christians do indeed need to admit to shortcomings and, at times, un-Christ-like behavior. But in looking at the bigger picture, the Christian church has always been united on key points of belief such as the reality of a personal, loving God, salvation that is found in Christ through His death and bodily resurrection, human depravity, and the need for redemption through Christ and more. This “mere” Christianity or core of unshakable truths has united Christian churches throughout the centuries and continues to do so. As C.S. Lewis shared, “In spite of all the unfortunate differences between Christians, what they agree on is still something pretty big and pretty solid: big enough to blow any of us sky-high if it happens to be true. And if it’s true, it’s quite ridiculous to put off doing anything about it simply because Christians don’t fully agree among themselves.”[1] In other words, when it comes to the essentials or primary matters, Christians are united, but when it comes to nonessentials or secondary matters, there is room for some disagreement. This disagreement, however, does not change the unity on the foundations of Christianity such as the person of Christ and His role in human redemption.

Making an Eternal Difference
The Christian church is not a building, but a body of believers united in Christ. Its role is to worship God, nurture and edify and reach out to a suffering world with the saving message of the gospel as well as the practical compassion and mercy exemplified in Christ. To this end, ecclesiology is not some ivory-tower, academic discipline removed from the reality of daily life. Instead, learning more about the church helps us make a real difference in the world, not just temporally, but for all eternity.[2] [1] C.S. Lewis, extract from his BBC radio talks not found in the printed text of Mere Christianity, as cited in Walter Hooper, C.S. Lewis: Companion & Guide (HarperSanFrancisco, 1996), p. 307. [2] For more insights on ecclesiology consult any number of systematic theology texts such as Systematic Theology, Volume Four by Norman Geisler (Bethany House, 2005), Systematic Theology by Wayne Grudem (Zondervan, 1994), Christian Theology by Millard Erickson (Baker Books, 1998), and Integrative Theology, Volume Three by Gordon Lewis and Bruce Demarest (Zondervan, 1994).”